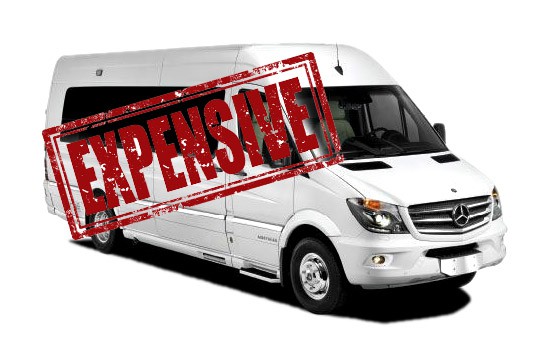 A Tale of Two Vans

At the turn of the century, Mercedes-Benz sold a mammoth cargo van in the United States as a Dodge Sprinter. After a few years, Mercedes reclaimed the name, leaving Dodge and parent company Chrysler out in the cold. Once Fiat purchased Chrysler, Chrysler turned to its new father for help, and Fiat obliged. Up its sleeve it had the Fiat Ducato, a popular European van produced for three generations and trusted as a cargo van and motorhome. Built on the Ducato chassis and much to Mercedes’ chagrin, Chrysler unleashed the Ram ProMaster work and cargo van.

Now, the Ram Sherry Van, built on the Ram ProMaster chassis, is taking on the Airstream Autobahn, a gussied-up Mercedes Sprinter. It is an age-old battle – but the Sherry Van boasts some startling new weaponry.

Both vans have fuel-efficient and powerful engines. The Autobahn has a 3.0-liter turbocharged diesel engine, whereas the Sherry Van gives you the option of Chrysler’s rugged 3.6-liter, 280-horsepower Pentastar V6 engine or a 3.0L EcoDiesel I4. Over the life of the vehicle, the savings grow monumental, thanks to the lower cost of gasoline and the Sherry Van’s superior fuel economy.

When the Rain Comes

Perhaps the greatest disparity between the two is the drivetrain. The Sprinter, like most truck-based vehicles, is propelled by its rear wheels. Meanwhile, the Sherry Van has Front Wheel Drive. When the rain pelts down and the snow piles up, the Sherry Van will perform where the Airstream will flounder. The front-wheel drivetrain also contributes to a lower, more accessible floor and easier, cheaper maintenance.

Both Conversion Vans have interiors that would tempt a sheik. Drawing from Mercedes’ deep well of safety features and interior accoutrements, Airstream bedecked the Autobahn with two refrigerators, powered footrests, a 32-inch LCD display screen and a wireless onboard control system.

Small beans! Retorts the Sherry Van. It comes with a 32-inch LED television, wireless onboard control system, Pioneer surround-sound audio system and dual front/rear stereos. Ports are provided for gaming consoles. Passengers lounge in perforated, power-adjustable leather seats. Everything that moves – windows, exterior mirrors and more – can be electrically operated. All this technology and ambiance is packed into a luxurious Nine-Passenger behemoth with enough legroom for Shaquille O’Neal.

Yet there is an elephant in the room, and a fat elephant it is: $133,000. Airstream demands $133,000 for the Airstream Autobahn. The Sherry Van costs $68,000 less. That’s half the price for comparable luxury and superior all-weather performance.

That’s the power of the underdog.