The front-wheel drive Conversion Van is gaining in popularity because of its lack of a full-length drive train. This means that the interior of the cabin can be more spacious, and because the van rides closer to the road level, vertical interior space has increased. The Ram ProMaster Passenger Van is an excellent example of how a workable platform can be used to create a very nicely appointed cabin. 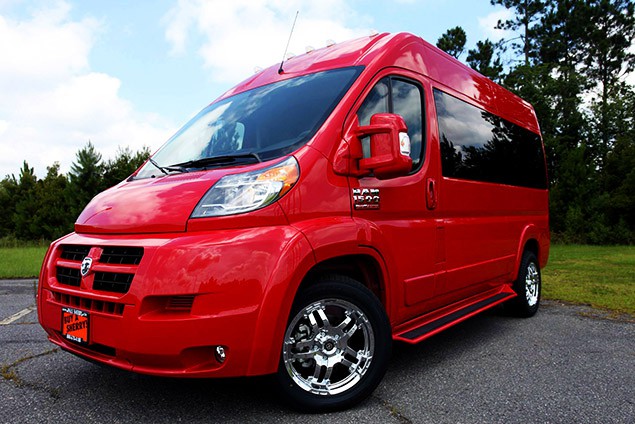 Advantages Of The Ram ProMaster

First and foremost, the platform upon which the ProMaster is built allows for plenty of weight for interior amenities without drastically reducing the fuel efficiency. The Ram ProMaster gets better fuel mileage than either of its closest competitors, namely the Chevrolet Express/GMC Savanna twins and the Ford Transit Conversion Van.

The low-riding design means a low-top appearance, but this should not be considered a minus when considering a new conversion van purchase. The actual height of the cabin is nearly six feet, which means that most adults can stand up without bumping their head. Try that with a low-top Chevrolet or GMC.

The window configuration can be altered in several different ways. The vehicle is often labeled the Ram ProMaster Window Van because of the standard locations of the windows on the sides and rear. These can be fitted with very nice shades, shutters, or blinds. In fact, the right-side sliding door can be fitted with the same window dressings as the other windows on this vehicle. The oddly-shaped windows on most other conversion van models do not allow for this type of customization.

The six-cylinder engine is very fuel-efficient yet provides plenty of power to get a fully loaded van up the hill. The Ram ProMaster 1500 is even capable of towing up to 5,100 lbs. The engine is also very responsive and it usually surprises drivers with its overall pep.

The basic van body has not been altered over the past year, nor has the price been raised since 2013. So long as the owner decides on modestly furnished interior features, the total price will compare favorably with the offerings from Ford, Chevrolet, and GMC. The long-term cost of ownership will probably be lower due to the vehicle’s higher mpg and its durable build.

Located in Piqua, OH, Paul Sherry Conversion Vans specializes in Custom Conversion Van builds based on the Ram ProMaster. This is one of the hottest sellers in the region, and the folks at Paul Sherry can design a beautifully appointed interior, offering buyers a wide range of materials and color options. Sliding sofas and reclining captain’s chairs, customized wiring for entertainment systems, and special lighting features for mirrors, cup holders, and door panels are just a few of the special options available when a personalized Ram ProMaster is designed and built by Sherry Vans.